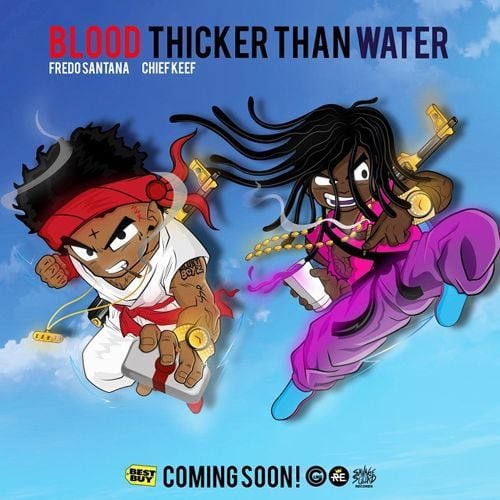 Blood Thicker Than Water is an unreleased collaboration album from Chief Keef of Glory Boyz Entertainment and the late Fredo Santana of Savage Squad Records. Fredo first teased the album, back in February of 2014, announcing that him and Keef would be releasing a collaboration album. Me & @ChiefKeef coming out wit a album #BloodThickerThanWater Glo Gang / SavageSquadRecords who ready ???? A year after Fredo teased the album, Fredo announced on his Instagram page that the album would be out by the end of May 2015, as well as being released at Best Buy. BloodThickerThanWater The album out everywhere on iTunes end of May an Every Best Buy in America… Gang shit Squad shit #GBE #GLO #SSR Both Fredo and Keef later then uploaded the official cover art of the album. The album, however, missed it’s initial release deadline On January 19, 2018, Fredo unfortunately died due to a fatal seizure and an autopsy revealed he had developed cardiovascular disease in addition to the previous conditions he suffered from. It is unknown when will the album see the light of day.
Distribution of songs on Blood Thicker Than Water by producer
Songs