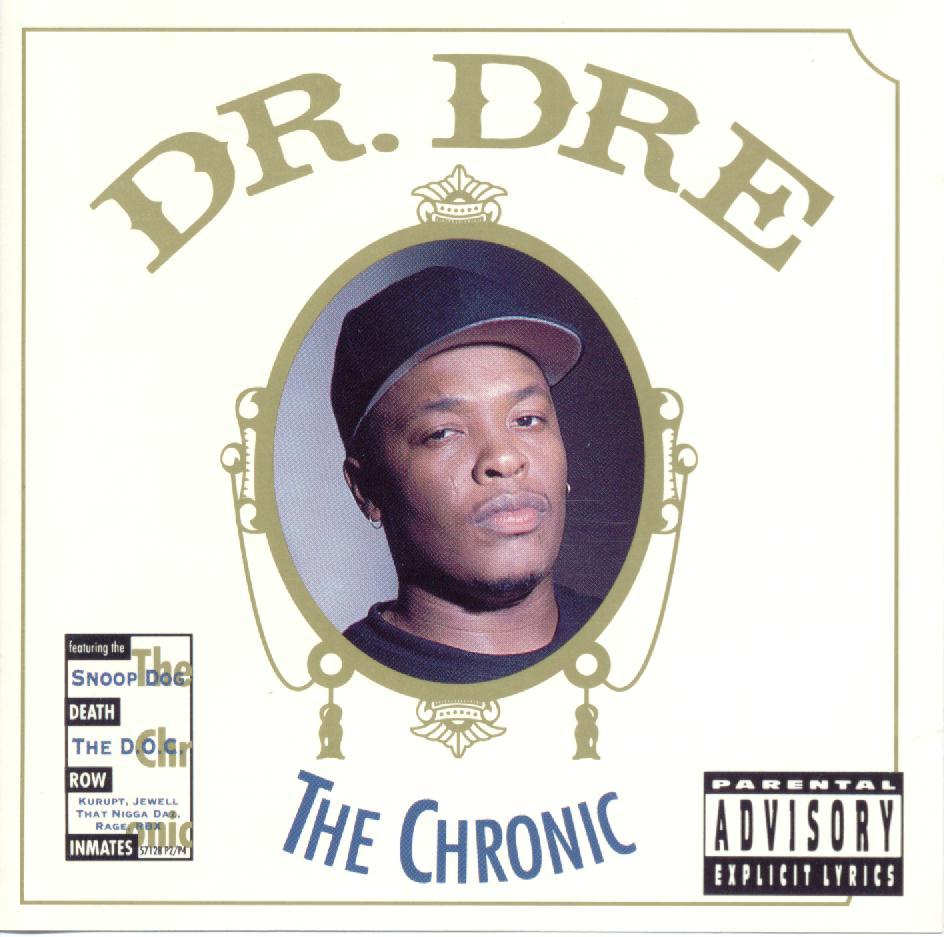 After leaving Ruthless Records and releasing the single “Deep Cover” with his protégé Snoop Doggy Dogg, Dr. Dre released his debut solo album The Chronic on December 15, 1992 through Death Row Records with distribution from Priority Records. The album’s cover was created in the style of the artwork for Zig-Zag rolling papers and the term “chronic” is used for high-grade marijuana. Snoop Dogg claimed that the term originated after he misheard his dealer explain that what they were smoking was hydroponic, which he explained on his GGN show. Musician Colin Wolfe, who worked with Dre on The Chronic and during the N.W.A days, talked about the inspiration for the album: The D.O.C. pushed him to do it: ‘Yo, Dre, you need to do your own thang!’ But I remember one day, Dre and I had a big discussion about the sound of the album. At the same time we were like, ‘We need to do some P-Funk-sounding shit.’ We wanted to make a real Parliament-Funkadelic album. Just get really deep and go out there with it. I was a huge P-Funk fan back in the day. […] Take “Fuck wit Dre Day (And Everybody’s Celebratin’),” for instance. I was thinking of Bernie Worrell when I was doing those kind of sounds. And that’s why the Moog is so predominant on The Chronic. The Chronic was created in the aftermath of the L.A. riots in April 1992, and several vocal samples from people on the streets were used on songs such as “The Day the Niggaz Took Over and "Lil Ghetto Boy.” Dre also fired some shots at his former N.W.A group mate Eazy-E on the tracks “Fuck Wit' Dre Day (And Everybody’s Celebratin')” and “Bitches Ain’t Shit.” Many of the songs were demoed and created at Dr. Dre’s house in Calabasas and recorded at the SOLAR Records studio Dre & D.O.C. purchased. Dre helped change the rap game with his gangsta rap productions on N.W.A’s 1988 album Straight Outta Compton. He once again changed the game with The Chronic as he helped popularize the G-Funk sound inspired by the P-Funk sounds of George Clinton and his Parliament-Funkadelic crew. Dre was also influenced by the jazz sound from A Tribe Called Quest’s 1991 sophomore album The Low End Theory. On top of the samples, G-Funk found on The Chronic featured heavy basslines and drums, Moog synths, keyboards, and live instrumentation to go along with the gangsta rap themes. This album helped further raise the profile of West Coast rap and helped establish Death Row as a powerhouse with the performances of the “Death Row inmates”: The Lady of Rage, Tha Dogg Pound’s Daz & Kurupt, Nate Dogg, and breakout star Snoop Dogg. Following the album’s completion, there was some trouble getting distribution in the beginning, in part due to Dre’s legal issues with Ruthless Records, which ended with Eazy-E receiving a royalty for every copy The Chronic sold. After Priority Records agreed to distribute the album, they refused to release it with the song “Mr. Officer,” which was removed and replaced with “The Day the Niggaz Took Over” amid the controversy around the song “Cop Killer” by Ice-T’s rock group Body Count. The album was certified triple platinum within a year of its release with support from the singles “Nuthin' But a ‘G’ Thang,” “Fuck Wit' Dre Day (And Everybody’s Celebratin'),” and “Let Me Ride,” which won a Grammy Award for Best Rap Solo Performance in 1994. The Chronic is one of the most celebrated albums in hip-hop history and has been featured on many “best of” lists, including The Source’s list of the Top 100 Rap Albums of All Time and a rank of #138 on Rolling Stone’s list of the 500 Greatest Albums of All Time. Despite the album’s classic status, Dre revealed that he doesn’t like listening to the album because it reminds him of a bad era in his life: You know what? That particular record, man, that’s like, I would say the toughest record that I’ve recorded in my career because, you know, it was right after my separation with Ruthless, and I was in survival mode. And, you know, going from that to the organization that I went to with all the things that were happening in the studio during the making, it was crazy. During that process, my house burned down, I was shot in the legs, and I was in the studio on crutches for a couple of weeks. So it was a lot that went into that record. It was blood, sweat, and beers that went into it, you know what I mean? So, that’s one of those records that I don’t even listen to anymore. Colin Wolfe talked about The Chronic and displayed how the sounds of the album were created:
Distribution of songs on The Chronic by producer
Songs