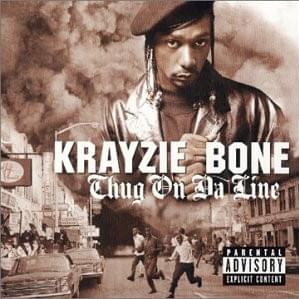 Thug On Da Line is Krayzie Bone’s second solo studio album, released in 2001. It received generally positive reviews from music critics. The album solely featured Thugline rap artists, instead working with well known producers like The Neptunes, Lofey, Irv Gotti, LT Hutton, Def Jef, Damizza, Tim Feehan and The Co-Stars among others. Eventually, the album was certified gold by the RIAA. Amazon.com went as far as labeling it one of the best albums of 2001. A video was shot for his single Hard Time Hustlin', which featured a vocal sample of Sade’s Feel No Pain.
Distribution of songs on Thug On Da Line by producer
Songs