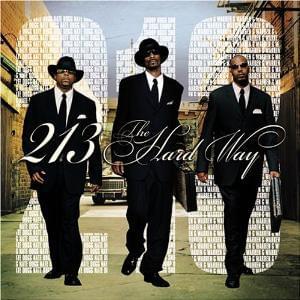 The Hard Way is the only studio album by West Coast hip-hop supergroup 213 consisting of members: Snoop Dogg, Nate Dogg, and Warren G. Released on August 17, 2004 the album included the hit singles “Groupie Luv” and “So Fly.” The album reached #4 in the U.S. on the Billboard 200 charts. Unfortunately, this would prove to be the group’s sole release as member Nate Dogg would suffer multiple strokes in 2007-08, rendering him incapacitated. He would eventually pass away on March 15, 2011, due to complications of multiple strokes effectively ending the group.
Distribution of songs on The Hard Way by producer
Songs