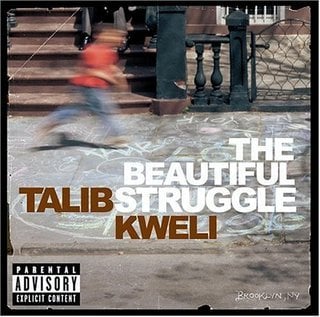 The Beautiful Struggle is the second solo album by Talib Kweli. The album was released in 2004, and features guest appearances by rappers such as Common and Jean Grae. The Beautiful Struggle, as with all of Talib Kweli’s work, has a much more serious and conscious focus, providing an alternative to the norm of mainstream rap and hip hop. The album name, “The Beautiful Struggle”, from a inspirational quote from Yasiin Bey. The quote (found inside the album liner notes) is: Life is beautiful. Life is a struggle. Life is a beautiful struggle. The phrase, “Beautiful Struggle”, originated in a famous Martin Luther King Jr. speech entitled “Beyond Vietnam: A Time to Break Silence”: We must move past indecision to action. Now let us begin. Now let us rededicate ourselves to the long and bitter, but beautiful struggle for a new world. This is the calling of the sons of God, and our brothers wait eagerly for our response. The album featured production from Kanye West, The Neptunes, Supa Dave West, Just Blaze & Hi-Tek. The first single off the album, “I Try” featuring Mary J. Blige, was fairly popular as a music video, followed by the second single “Never Been In Love”. (Before the official release of this album, a bootlegged advance of the CD began to be circulated on the Internet in the rough stages of production. Because of this, the track listing was altered prior to release. “We Pullin' Out Tonite” was not on the final version.)
Distribution of songs on The Beautiful Struggle by producer
Songs